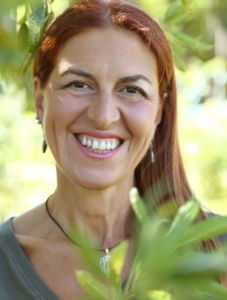 I have been involved in psychological and spiritual growth, and in bodywork for over thirty years.

I met the Enneagram in 2002 with the brasilian teacher Maisa Branco Castelo – Ma Amrit Racily – and since then I’ve deepened the knowledge of the system in the United States with The Enneagram Institute with Don Richard Riso and Russ Hudson, with The Enneagram in the Narrative Tradition with Helen Palmer, David Daniels, Peter O’Hanrahan and Terry Sarracino, in Enneagram in Business and Coaching with the Enneagram with Ginger Lapid Bogda, in Enneamotion with Andrea Isaacs. I have also been trained by Claudio Naranjo, Sandra Maitri, Olivier Clousot, Tom Condon and Katerine Chernic-Fauvre.

In the somatic field, I have diplomas with the School of Body-Mind Centering® as Somatic Movement Educator and as Infant Development Movement Educator, certifications in Bioenergetics and Body Reading (Lowen), Osho Dance therapy and Expression Primitive as a direct student of Herns Duplan. I’ve been trained in ballet, contemporary dance, improvisation and Life Moves.

I have also been trained in Aura-Soma®, Neuro-Linguistic Programming and Creative Problem Solving.

I have developed a dynamic method oriented to the development of awareness and the inner transformation that integrates the body of knowledge of the Enneagram with the somatic experience and the vision of the Integral approach that awakens, involves and integrates emotional intelligence, intuition and instinct.
I work as a professional counsellor and trainer for corporate training companies, Coaching schools, Counseling schools, Drama and actor schools and Dance schools.

I offer workshops and trainings in Italian, English and French, in Italy and in various European countries. I’ve been a speaker at the International Enneagram Conferences in Brussels in 2009, in Denmark and San Francisco in 2010, in Portugal in 2014, in Sweden in 2015, in Finland in  2017, at the on-line Global conference in 2021 and in Egypt in 2020 and 2022. I presented the Enneagram in support of Ken Wilber’s Integral Approach at the European Integral Approach Conference in Budapest in 2014.
I published “Crescere con l’Enneagramma” with Armenia Edizioni in 2018 and I have written for various Italian journals.

In 2000 and 2001 I’ve experienced the life in the Osho Commune in Pune, particularly deepening the meditative therapies and the work with childhood issues. In 2005 I became a disciple of Maulana Sheikh Nazim al-Haqqani al-Qubrusi and since then I transmit the Enneagram with his blessing.