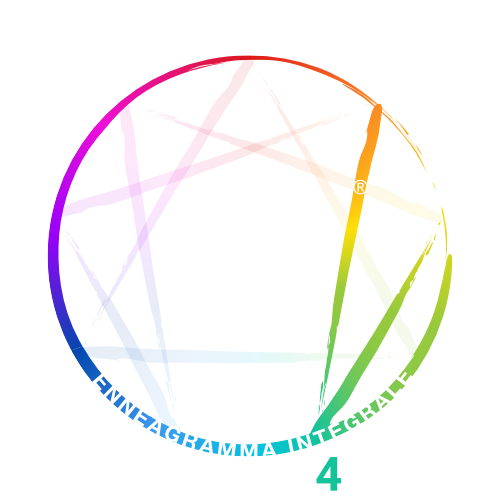 Point Four puts us in touch with the desire to discover who we are. It invites us to forgive ourselves and let go of the past.

Point Four represents the archetype of intimacy with ourselves and beauty. It is the part of us that strives to discover our true identity, delving into emotions and seeking authenticity.

When we experience the high qualities of this point we feel deeply connected with ourselves. We experience a sense of individuality and the mystery of who we are that is beyond our experience and our history. We want to discover our personal meaning and manifest it in a way that the world recognises.

Point Four is part of the Intelligence Center of the Heart and emotion. People with this dominant personality type are oriented towards relationship and image.

Type Four wants to express his individuality. His core value is a world full of beauty. He has great aesthetic qualities, class and elegance and brings a creative and distinctive style and touch to whatever it does. He wants to live his life in an original way and with a unique sense and meaning.

At his best he is an introspective person who is aware of himself, his emotions and inner impulses. He is really sensitive, impressionable and intuitive both about himself and about others. He is an individualist who reveals himself and makes himself known, true to himself, emotionally honest and consistent. He is gentle, discreet, quiet, thoughtful, compassionate, deep and passionate. He is inspired and highly creative. He continually realises and renews himself and is capable of transforming all his experiences into something precious.

When type Four loses connection with his sense of depth and intimacy with himself, he feels the need to seek and rediscover his personal meaning and his individuality.
He begins to believe that being special and hypersensitive is the only way to be authentic, unique and creative.
He becomes easy to infatuation and idealisation, very expansive, expressive and sentimental. He feels different and exclusive, starting to be dramatic and difficult to understand.
Then everything becomes an aesthetic question, he takes on an artistic and romantic orientation to life, wants to create around him a beautiful and elegant environment and a refined atmosphere to cultivate and prolong passionate feelings and unruly imagination. He is so absorbed in feeling deeply and finding himself with a wistfulness for beauty that he becomes more and more sensitive and reactive, hypersensitive to be seen in the way he wants to be seen.
To maintain his sense of uniqueness he seeks and finds what is missing or defective in himself, in his relationships and in his environment. He is often seen by others as whiny, exaggerated and dramatic although this is not how he perceives himself.

The reactive emotional environment that matures, the passion of this type, is envy. Envy is a widespread sense of absence, of something lost forever. It is more than wanting to have someone else’s object or identity, it is a yearning for the emotional satisfaction that others seem to have. It is the feeling of not being wanted because defective of something that others have and at the same time makes others considered as boring, stupid and too easily satisfied.
This reactivity leads type Four to believe that he is much more sensitive and profound than the rest of the world, not trivial and obvious like everyone else, and pushes him to become more and more precious and difficult. The more he strives to be different and unique, the more he intensifies his emotions to build a fictional character to identify with, the more he feels alienated, sidelined, abandoned and deceived.
He feels misunderstood, threatened by the world, insecure. He fears that he is too fickle for this world, he falls into self-pity and indulgence with himself and becomes an increasingly less practical and productive melancholy dreamer. He is very touchy, takes everything personally and treats people with contempt. He wants to be free to express himself and confuses doing and saying what he wants when he wants with being honest and authentic.

Type Four at his worst needs to demean others to feel superior, he becomes disdainful, haughty, insolent, conceited, arrogant, bully, petulant, pretentious, tyrannical, difficult and demanding. He believes that his situation is hopeless, that everything is useless. He feels like a victim, a loser, inhibited and blocked. He feels shame and self-denial. He is agitated, depressed, tormented by guilt, becomes malevolent and cruel, and wants to punish himself and others indirectly. He hates, rationalises, blames and blames. He ends up feeling the nothingness he fears he is.

Point Four invites us to forgive ourselves and let go of the past and puts us in touch with the desire to find out who we are. To contact this inner dimension it is necessary to let go of the belief that we are missing something that others have or are. Accepting ourselves for what we are in every moment opens a spaciousness of the heart that embraces all emotions and experiences without the need to attach and identify with any of them. Beauty helps us to remember our identity, who we are, our true nature.

THE MOST FAMOUS TYPES FOUR